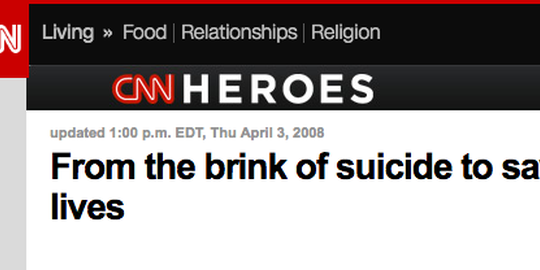 (CNN) — Twenty-three years ago, Scott Silverman found himself at an open, 44th-story window, on the brink of suicide. Two decades of escalating substance abuse, blackouts and depression had brought him to this moment.

“I didn’t think of myself as depressed, but then my drinking got so bad at the end, I felt my life was over,” Silverman recalled.

Just then, a colleague entered the room and asked him what he was doing. Silverman entered rehab the next day and has been sober ever since.

Fast forward to 2008. Silverman has turned not only his own life around but also the lives of thousands of others. Rehab and volunteering brought him close to a community of others in need: people in shelters, those who were homeless, others who had come out of jail.

They all shared one problem, Silverman saw: They were unable to find and keep a job.

“I thought, I’ve been in treatment, I’ve lost jobs, but I got lucky and had a very supportive family. I had to find a way to help them more effectively,” he said.

The vehicle for that assistance is his Second Chance program in San Diego, California. It provides job readiness training, housing for sober living, and mental health and employment support services for what Silverman calls a “difficult-to-serve” population.

Started in 1993, Second Chance has provided services to more than 24,000 individuals. It helps graduates with job placement and follows up with them for two years.

ABC News Has Crisis Coach on Segment about Fentanyl in Candy Packages in California
October 23, 2022