The Man Who Dared to Say a Three-Letter Word 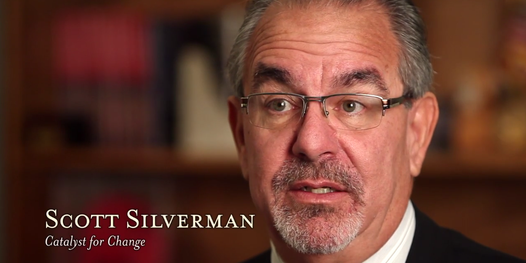 A three-letter word: yes. So short and small, yet so powerful. And, Scott Silverman said it. In 1984, in San Diego, Scott H. Silverman was an alcoholic, a drug addict and dealer, and was depressed. He had grown up as a rebellious troublemaker who was told by doctors and teachers that he was stupid and not good at anything. By seventh grade, he was addicted to drugs and alcohol. On a sales trip as an adult, he stood at an open window on the forty-fourth floor of a building and was about to give up on life. Just in time, an associate asked him what he was doing. Today, Silverman is completely clean and sober, and he has created a program called Second Chance which gives the homeless, ex-convicts, the depressed, and addicts classes on getting jobs. He has helped over 24,000 people get back on their feet and back to work. Heroes in our society today are often defined by their appearance, wealth, and popularity. If that truly defined a hero, then this essay would be about the Kardashians. Real heroes act on selfless qualities, for the greater good of the world. Enlightened by his own near downfall, Scott Silverman uplifts others, makes sacrifices for their benefit, and perserveres with unwavering determination to help others succeed and contribute to society.

Silverman uplifts others daily, encouraging them to find their “yes” in life. In the Second Chance program, Silverman gave individuals with hopeless pasts the keys they need to become effective contributors to the work force. One of those individuals is Anthony Panarella. “Anthony Panarella is an ex-convict who recently graduated from Silverman’s prisoner re-entry employment course. There, he learned how to write a resume and cover letter as well as how to stand out in a job interview….‘We send in individuals job-ready, smiling, professionally dressed and ready to go to work,” Silverman said… Panarella says…‘Little kids have Superman or Spiderman. I have Scott Silverman’” (CNN). Instead of working for his own benefit, Silverman decided to take the skills he learned and lift others up to succeed themselves. Some people, like Silverman himself, need a little extra help getting back up on their feet. Giving that help with his Second Chance program, Silverman changed thousands of lives by assisting individuals every step of the way to qualify for jobs. Anthony Panarella said it plainly. Silverman undoubtedly possesses the qualities of a true superhero. This Second Chance graduate is living proof that the help Silverman offered his students at Second Chance makes a difference. Not only does Silverman physically help others, but he truly cares about them as human beings with challenges and feelings. “I listened to others, asked questions, and genuinely cared about what they had to say…I worked with people with perceived barriers…and I believe everyone has talents to put out into the world” (Scott Silverman). In a world where everyone is always in a hurry, people just want to be acknowledged and know someone cares about them. Silverman sees the good in others, even if their past has been questionable. No matter what they have done, they still deserve the respect Silverman gives them. Most people look down on ex-criminals or addicts. Silverman puts their pasts behind them and views them as growing, changing individuals with immense potential. In an interview, Silverman expressed the talents that gang leaders could turn from bad to good. He said they know how to lead and execute orders, which could make them an excellent employee or manager. He doesn’t see the badness of a gang leader, he sees the future job that gang leader could have if he channeled his skills to do good. Silverman uplifts others to be all they can be, in order for them to succeed.

Making sacrifices for the benefit of others is one of Silverman’s leading qualitites. In order to help people succeed, Silverman makes sacrifices to teach valuable lessons. “Silverman’s staff regularly enters the California correctional system to introduce their services to prisoners anticipating parole. Those who are accepted into his program are transported to sober-living housing the day they’re released and given sixty days of immediate free housing, clothing, incidentals and enrollment in job readiness training” (CNN). Silverman worked incredibly hard to raise money to provide for his students. The people who enter Second Chance do not have to pay a cent for the help they are getting, and the skills they learn there are priceless, life-long treasures. Silverman dedicated his time, life, and money to create this program that continues to help others off their feet. As well as basic needs for the students, Silverman makes sure mental help is provided. He understands the things that people have gone through, because he experienced them himself. That way, he can truly help meet their needs. Sometimes all it takes is the right mindset to keep going. To sacrifice so much time, money, and probably some of his sanity to the people he is working with, demonstrates that Silverman is extremely devoted to helping people. “There’s a quote, ‘teach someone to fish; don’t give them a fish.’ Show them how and teach people how to do things themselves. Encourage people to ask for help. They need to be comfortable with being uncomfortable” (Scott Silverman). Some think Silverman is forceful at times in teaching his students, but as he says, giving someone their fish will never prepare them for when they go fishing by themselves. Instead of giving the students the answers and a batch of homemade cookies to go with it, Silverman pushed his students incredibly hard, preparing them for the real world. With a tough-love attitude, he tought others that once they are in the work force, it is do or die. He helped them practice that now instead of letting them learn it the hard way later. Silverman tought students right off the bat that you cannot live with being comfortable. Because in the end, staying comfortable in the same place will never get you anywhere. Instead of forcing his students to learn it the hard way when they are in the work force, Silverman helps others even if he did not get that help himself.

Silverman lives life and executes his goals with unstoppable determination. This determination comes from the challenges he has beaten in his own life. “My motto is: Go ahead. Tell me no. I dare you! Go ahead. I will find a way to get to Yes. I vow to do that today; I did it yesterday; I will do it tomorrow. I will find Yes. Every day, every week, every year, I hear no all around me—‘No, it can’t be done…No, you don’t have enough education…No, there is not enough money…No it will never work…No. I can’t…No, I don’t know how.’…I dare myself to say ‘Yes,’ and I lead others to say ‘Yes’” (Silverman 1). Nothing is more satisfying than conquering challenges, and Silverman redefines the word “yes” as a victory call for everyone to live their dreams and do what is right. He is determined to find the light in the darkness, and has centered his life on it. He once questioned to his ability to live. Now he lives to help others. Others can see his determination towards his goal in his passionate language when writing. The short, powerful sentences communicate his enthusiasm for beating the odds and conquering thatwhich is said to be impossible. Through his inspiring words, Silverman communicates onceagain that nothing is ever impossible, and that his life and work is proof of that: “We all choose.Every day we choose. Even if you don’t make a conscious decision, you still choose. My prayeris that no matter what your particular situation, no matter how bleak things may seem, no matterhow trapped, beaten, or scared you are feeling, you will find the strength and courage to rise up,face the no that surrounds you, take a deep breath, and shout at the top of your lungs, ‘Tell MeNo. I Dare You!’” (Silverman, 169). Silverman emphasizes that his dream is that everyone cansee the good in everything. He believes that the world would be a better place if everyone said“Yes.” Someone willing to change the world is undoubtedly a hero. Silverman is not thewhispering type. He encourages others to to proclaim their victory loudly and proudly as hedoes. In a follow-my-lead kind of way, Silverman urges others to not only help people, butconquer what is bringing them down and be a better person. Silverman’s charisma is channeledinto inspiring others to beat their “no” and live their dreams.

By providing inspiration to others, making sacrifices to ensure their success, and livingwith an unmovable steadfastness, Scott Silverman is a modern superhero. He not only possessesthese qualities, but also he utilizes them to change the world, making sure anyone can have thesecond chance he received. He has dedicated his life to bettering the world around him byhelping individuals get to work and give back to their community. In America, we brag aboutbeing hard working and successful, yet we have millions of people out of work. We also havemillions of criminals in prison who cannot be in the work force. What Silverman does helpsAmericans get to work and stop committing crimes, which benefits the entire community. ScottSilverman is an inspiration to me because a relative of mine has depression. She is getting help,but it would be awful to imagine what would happen if she did not accept that help and end herlife. She is getting a second chance. Silverman almost committed suicide, and because herealized that there is a cause greater than himself, he decided to give life another try. I amgrateful that he said “yes” and turned his life around because it gives hope to me that my familymember deserves to live the life she imagined. He also inspires me to see the good in others andgive them a chance. In the comics, the hero usually risks their life for the victim, and in ScottSilverman’s case, he is selfless and brave in a completely normal way. He always sees ways toimprove and acts on it, what a true hero would do. Tell him no. He dares you!